skip to main | skip to sidebar

Two Tuesdays ago i went up to Idaho to visit Alena. It was alot of fun! I loved being on campus. There is a great spirit to BYU-Idaho. It was a fun week, after spending several days there i went to logan to stay with a friend from EFY! That added to the week and i really did have alot of fun! Then on Monday i left to Nauvoo to participate in a week long YFE which is like EFY but i think better. I'll try not to drag on to much but i enjoy talking about it so i think writing this is more for me then anyone else. It was such a amazing experience. It was an opportunity i wont forget. I've always loved studying church history and Joseph Smith and this week it became more real. The temple is beautiful and the city has such a peaceful nature. I particularly enjoyed doing baptisms in the Nauvoo temple. It is gorgeous inside with such an amazing spirit. Its amazing knowing that Christ walks those halls and it was special to get to sit in the chapel there a little longer to study my scriptures. I also loved going to Carthage. It was humbling to see the room Hyrum died in, where Joseph fled out the window and died, where John Taylor sang to the dear prophet and was also shot, and where Willard Richards had to witness this devastation. On Tuesday morning,our first morning in Nauvoo, a few of us woke up at 5 and went for a run by the temple and down into Old Nauvoo. The sunrise was beautiful especially behind the temple. The next day me and another girl got up early and walked to the temple just to study our scriptures on the temple grounds. I think we ended up spending more time taking pictures then studying but just the peacefulness of the grounds were worth it. The classes taught by brother Packer were also amazing. It seems like he knows everything. I loved listening to him. I can't say enough about the trip theres so much more we did and experienced. There were some amazing youth which will lead the church in the future to do great things. These are some pictures from my week and also a few of the many stories i heard all week but i just thought they were neat and hadn't heard them before. 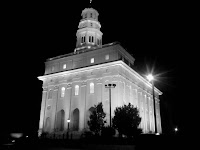 One interesting story was that after the saints left Nauvoo, a man named Joseph Agnew was one that started the Nauvoo temple on fire. He couldn't find his way out because of the smoke so he knelt down in the burning temple and said a prayer for help to get out and he finally did. I just thought it was interesting that he would burn down and mistreat the mormons but would still recognize God. Its frustrating that people would destroy such a building, but as chirst would say "forgive them for they know not what they do." I really believe they had no idea the extent of their actions. 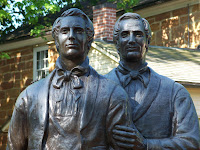 One thing that continues to impress me is how loyal and dedicated Hyrum was to the Lord's work and to Joseph. As i saw the statues of them together i realized how strong their relationship was. On the way to Nauvoo i was listening to a tape by Truman Madsen and he said that Hyrum was always loyal and he never asked why Joseph and why not me, eventhough he was the older brother and usually older brothers are placed higher up. He compared this to Laman and Lemuel and how they caused so much tribulation because they would not follow their younger brother. Joseph knew they would die as they were riding to Carthage and he asked Hyrum 3 or 4 times to turn back and return to his family but he wouldn't and said, "where you go i will go and where you die i will die." 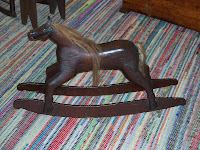 This little horse was inside John Taylor's house. They told the story that his little boy was so sad to leave this horse behind when they left Nauvoo because it couldn't fit in the wagon. After a few days of constant sadness and tears, John Taylor asked his son what was wrong and he told him that he missed his horse. John Taylor then proceeded back to the dangerous Nauvoo to pick up the horse to take back to his son. I just thought this was so sweet of John Taylor go back to get this horse a small thing but such a big thing to his son
Posted by Kensey at 11:36 PM

Tears are flowing - I love you sis! I am so thankful you have such a testimony. Kensey you are and will be "one of those leaders" - you are amazing. And you bring up the "caboose" of this family well. Thank you!
You're a dear one! Love, MOM Ü

Kenz..sounds like some amazing experiences. It is very humbling to remember all that those saints sacrificed. Would we be willing to do the same? Would we leave behind our precious possessions to know and be with God? We're so happy you are having all of these experiences. Keep a good journal of these events so you can "remember" them often...as President Eyring has instructed us to do. They will strengthen your testimony and your talents over and over again as you reflect on all that God has done for you...

Looks like you had a blast..I want full details of your whole trip on our way up to EFY!!!! I am so glad your home though =)

Wow, it all sounds amazing! I've always thought it would be awesome to go to Nauvoo! You are an amazing person and i'm glad you are getting to experience these things that will only strengthen your testimony. Thank you so much for sharing, i'm certain you have many other things to tell so i look forward to talking soon!

What an amazing opportunity to go out there and experience Nauvoo. I am so happy that you have been able to strengthen your testimony of the restored gospel. Amazing pictures!! Well done!
I hope you are coming on the trek! Imagine how more real it will be, being able to experience the trek like the pioneers.

i LOVED that story of Johm Taylor and the rocking horse for his child and also remember that story being told when we visited Nauvoo a while back. So tender!! Great stories! Thanks:)

Thats awesome!Sounds like an amazing experience! Glad you had a blast! (oh and love your new background:)We need to hang out sometime this summer and catch up!love ya!